Acclaimed as one of the most influential and inspirational women of African origin, Dr Justina Mutale is the “African Woman f the Year” 2012, an honour bestowed upon Justina on the same platform as Archbishop Desmond Tutu of South Africa as well as the former President of Malawi, The Rt. Hon. Joyce Banda and the former female Deputy Prime Minister of Zimbabwe, The Hon. Thokozani Khupe.  Justina has twice been honoured on the same platform as the first President of the Republic of Zambia Dr Kenneth Kaunda in the Voice Achievers Awards in the Netherlands and the Global Officials of Dignity (G.O.D.) Awards held at the United Nations Headquarters in New York.

Justina is the Founder & President of the Justina Mutale Foundation and its Scholarship Programme for underprivileged African Young Women. She is also Founder of POSITIVE RUNWAY: The Global Catwalk to Stop the Spread of HIV/AIDS. Named as one of Africa’s most respected names, well-known faces, and influential voices, Justina is listed in various Who’s Who Lists, Power Lists and Influential Lists, including the 100 Most Influential Creatives; Black Women in Europe Power List; Global Women Leaders Hall of Fame; and the Black 100+ Hall of Fame, an Exhibition & Legacy of the top 100 Black Achievers in modern Britain. She is also a Distinguished Member of the Royal Biographical Institute and the Global Institute of Human Excellency.

Justina  has been honoured for her outstanding and phenomenal leadership qualities as a National and Regional Stateswoman; as well as Global Leader of the Year, and Iconic Woman Leader of the Decade. She serves on the Board of the World Leaders Forum and is Global Ambassador and Spokesperson of the International Women’s Think Tank. A civil society delegate to the United Nations Commission on the Status of Women (UNCSW) and the African Union High Level Panel on Gender Equality and Women’s Empowerment,  Justina serves as President, Patron, Ambassador, Trustee, Board Member, Advisor and Mentor to various humanitarian, charitable and community organisations in the UK and overseas. Prior to founding her own organisations, Justina worked in the Commonwealth Secretariat in London.

Justina has been featured as a Hero in the Capital Finance International  Journal, which brings coverage and analysis of the drivers behind change by combining the views of leading multilateral and national organizations with thought leadership from some of the world’s top minds.   Having gained global recognition for her ability, as a public personality to use her status to potentially influence the thinking of both Africans and non-Africans alike, Justina is featured among Africa’s most respected names, well-known faces, and influential voices who inspire the future, motivate the young generation, and raise the profile to positively alter the perceptions of Africa and Africans around the world.

Justina Mutale with fellow recipients of the African Achievers Award, who include The Archbishop Desmond Tutu of South Africa; The Rt. Hon. Joyce Banda, then President of Malawi; The Rt. Hon. Atta Mills, late President of Ghana; and Babatunde Fashola, Governor of Lagos State, Nigeria

Listed as one of Africa’s game changers who are changing the game, changing the rules and changing the future, Justina  a member of the “POWER 14″ a consortium of African Diaspora Women Leaders selected for their phenomenal leadership qualities and achievements in community development.  The POWER 14 are part of the top 100 Diaspora ChangeMakers,  an international network of influencers and innovators from every field and background and a beacon for enlightenment values, which undertakes influential and varied research projects and combines thought leadership with social innovation to further human progress. The Diaspora ChangeMakers Network is a project by the Royal Society of Arts with support from DfID’s Common Grounds Initiative, Comic Relief and Unbound Philanthropy, that seeks to identify and bring together the UK’s most promising individuals of African origin with a desire to support African communities in the UK and Africa.   In addtion, Justina is a recipient of the  2013 WAF-MDG Award from the Women Advancement Forum, presented in recognition of her efforts towards the  actualization of the United Nations Millennium Development Goals.

Justina’s award winning global organisations,  POSITIVE RUNWAY: Global Catwalk to Stop the Spread, is a worldwide HIV/AIDS response campaign which spans 6 continents spread across the globe. POSITIVE RUNWAY is registered on the United Nations Department for Social and Economic Affairs (UNDESA) Civil Society Database and boasts membership and affiliation of various other international and global organisations including the Bond Network, which represents the largest household names in the UK International Development Sector, who influence key decision-makers at national, European and global levels; and the People’s Global Action on Migration, Development and Human Rights. POSITIVE RUNWAY is also a member of the ENOUGH FOOD FOR EVERYONE IF Campaign, a coalition of  leading UK development organisations working to end world hunger.

A recipient of numerous awards and accolades from around the world, Justina has been hailed as one of Africa’s shining beacons, a great Diaspora Role Model and Diaspora Woman of the Year 2012 and 2013.  In addition, Justina is featured in the BLACK 100+ Hall of Fame, an Exhibition and Legacy of the top 100 Black Achievers in modern Britain.  She is featured on the Black Women in Europe PowerList; the AFRONews Top 12 List of Remarkable African & Caribbean Women in the UK. 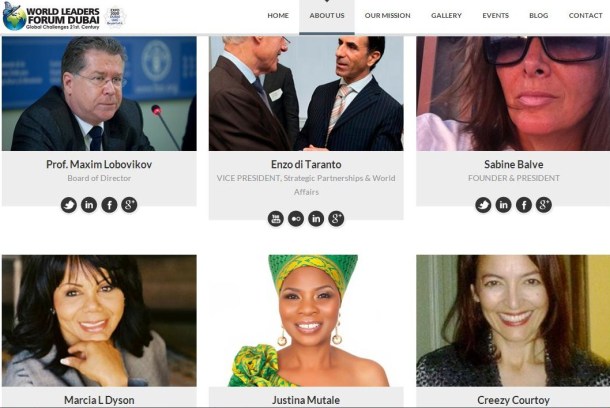 Justina Mutale with fellow members of the Board of Directors at the World Leaders Forum Dubai.

Justina has been honoured as an Ambassador for Peace recognised by the Universal Peace Federation, a global alliance of organizations dedicated to building a world of peace in consultative status with the United Nations.  She has also been honoured as Africa Global Goodwill Ambassador in Los Angeles, California.   In addition, Justina has been honoured as a Global Officials of Dignity  and  Humanitarian Ambassador in the Global Officials of Dignity (G.O.D.) Awards held at the United Nations Headquarters in New York.  The G.O.D. Awards honour individuals including members of ancient kingdoms, empires and royal dynasties from across the globe who have are invlolved in humanitarian work and have outstanding civic and charitable stewardship and have significantly improved the quality of life in their communities through their expertise, talents and skills.  Justina is one of the few African women to be featured in a UK Television Series on “Eminent African Women” and also in a TV Documentary “The Travelling Princess: The Joureny of Hope, Love and Humanity produced in Hollywood which features recipients of the Global Officials of Dignity (G.O.D) Awards, who include members of some of the world’s ancient kingdoms, empires and royal dynasties who are involved in humanitarian work across the globe.  Justina is also featured in a book on “Women Who Are Contributing to the Sustainable Development of the World” published in Paris; and another titled: “Women who Changed Africa”, published in New York.

A Philanthropist; International Speaker; Humanitarian; Philosopher; HIV/AIDS & Human Rights Activist and Advocate, Justina sits on the Advisory Board of the WORLD LEADERS FORUM based in Dubai.  She President, Patron, Ambassador, Trustee, Board Member, Advisor and Mentor to various humanitarian, community and charitable organizations in the UK and overseas.  Justina serves as Diaspora Ambassador &  Spokesperson for the ENOUGH FOOD FOR EVERYONE IF Campaign, which is supported and endorsed by world personalities and celebrities including Bill Gates, Archbishop Desmond Tutu, David Beckham and many others.  She also serves alongside the Deputy Prime Minister of Zimbabwe on the Advisory Board of the African Achievers Awards.

A regular Speaker on social, economic, political and gender issues, Justina has been featured in the same television programme as the British Prime Minister talking about poverty and world hunger.  She has also addressed the U.S. National Congress of Black Women in Los Angeles, the most powerful women’s organisation in the USA, which has been addressed by U.S. President Barack Obama and First Lady, Michelle Obama.  Justina has also addressed the European Leadership Conference at the UK Houses of Parliament in London and was invited at a Keynote Speaker at the Gender Economics Global Conference in Sydney, Australia.

As Diaspora Ambassador and Spokesperson, Justina has been one of the influential personalities driving the ENOUGH FOOD FOR EVERYONE IF Campaign, a coalition of over 200 leading UK development organizations and charities working to end world hunger by appealing to the G8 to revise policies that accelerate hunger.  She is also a Civil Society delegate to the United Nations General Assembly on the High Level Dialogue with UN member governments on International Migration and Development, (POST 2015 Development Agenda). 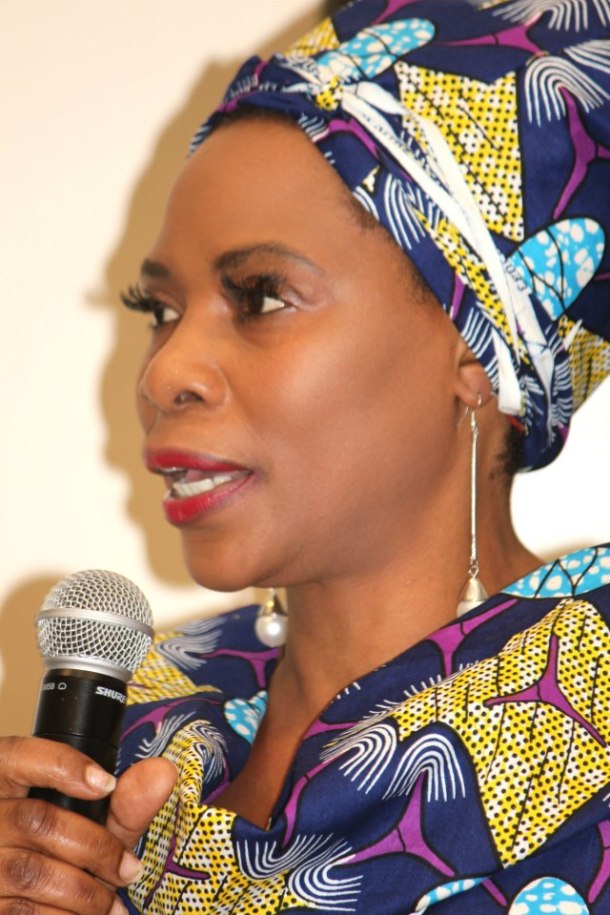 Delivering the Keynote Address at the Annual African Achievers Lecture themed: THE FUTURE IS AFRICA

Justina also serves alongside  the Deputy Prime Minister of Zimbabwe on the Advisory Board of the African Achievers Awards. She also served alongside American boxing legend, Evander Holyfield and UK multi-millionaire anti-gun campaigner Stephen French on the Board Member of the International Peace and Global Peace Programme (IPP) aimed at taking guns and knives off the streets. In addition, Justina  serves as International Ambassador for the Global Women Inventors & Innovators Network (GWIIN);  AMFEST Ambassador ((African Music Festival); Patron and Board Member of the CARE2FEED Hunger Project (South Africa);  Trustee of the KE Foundation for Deaf and Hearing Impaired Children; and Trustee and Ambassador of Colourful Kidz Organisation (UK).

In addition to being the African Woman of the Year 2012 and being  featured in the BLACK 100+ Hall of Fame Justina has been honoured with the WAF-MDG Award in recognition of her efforts towards the  actualization of the United Nations Millennium Development Goals (Johannesburg South Africa).  She also emerged a Role Model of the Year in the  Women4Africa Awards (London); in addition to being a  recipient of the African Women in Europe Awards. Furthermore Justina has been honoured as Renaissance Woman of the Year (British Virgin Islands); Pioneer Woman of the Year (UKZAMBIANS); Outstanding African Woman of the Diaspora (The Netherlands); Leading Innovative Woman (Ghana);  Business Woman of the Year (Scotland).  Award for Service to the International Community; Global Women Inventors & Innovators Award; GAB Award (Gathering of Africa’s Best); International Honorary Award; Leading Innovative Woman Award;  Women in Enterprise Award; Southern African Achievers Awards; Female Personality of the Year; Business Woman of the Year; Inspiration Award; Community Champion; Outstanding Contribution to Community; Best Beauty Pageant Director; and Best Event Promoter.  She was also nominated for the UK Sunday Times’ Change Makers Award for the most inspirational Social Entrepreneur in the UK.

Justina has worked around the world on various high profile international PR campaigns in music, film, fashion, entertainment, business, arts and politics, and has provided consultancies to a variety of clients ranging from individual personalities to international organizations; inter-governmental organizations and multinational corporations, as well as working on Presidential campaigns across the globe.

Justina’s work has received global recognition around the world including a Commendation and Resolution from the General Assembly of the Georgia State Senate in Atlanta GA in the United States of America, in addition to endorsements from various prominent world personalities, including the Governor of Florida and the Mayor of Miami in the USA, and subsequent Zambian High Commissioners to the UK, among many others.

Prior to founding her own organisation, Justina worked in the Gender Section of the Commonwealth Secretariat, a prestigious international and inter-governmental organisation based in London, dealing with women’s economic, social and political empowerment, including Gender & HIV/AIDS; Gender & Trade; Gender-based Violence; Gender, Peace Building & Conflict Resolution; Women’s Political Participation; and Women’s Social & Economic Empowerment.

Justina has studied Political Science; International Relations and Public & Cultural Diplomacy as well as Public Administration. She is a student of Practical Philosophy and holds a MENSA Certificate of Merit .  Justina lives in London with her two daughters. 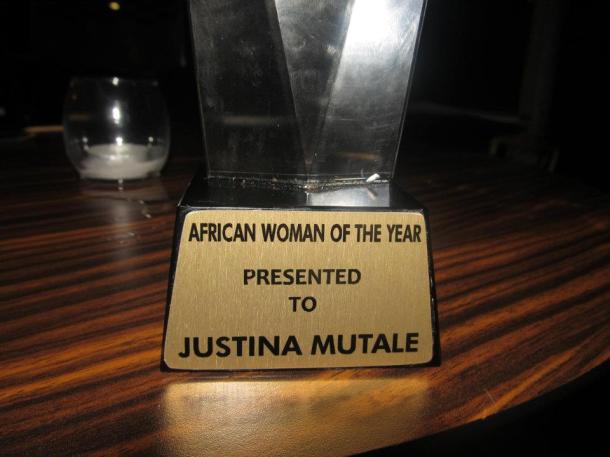