Dublin, Ireland:   African Woman of the Year (2012), Justina Mutale has launched s report on “PATHWAYS TO POWER:  Creating Sustainable Change for Adolescent Girls” to mark the United Nations International Day of the Girl.  The Report Launch took place on Tuesday 7th October 2014 at Chester Library, which is situated at Dublin Castle in Ireland.

Ms Mutale, who is also Honorary Ambassador for Gender Equality & Spokesperson for the International Women’s Think, was joined by the Irish Minister of State for Foreign Affairs and Overseas Development, Mr Sean Sherlock.

The Report is an initiative by overseas development organisation, Plan International Ireland and forms part of their annual “BECAUSE I AM A GIRL” series, which looks at the state of the girls in the world.

The 2014 Report reveals that while the Millennium Development Goals have progressed since their inception in 2000 in the areas of health and education, women still lag behind men when it comes to education accomplishment, earning power and political influence.

The report found that:

The Report also makes a series of recommendations on how to transform the institutions that wield power and inhibit women and girls from progressing.

On launching the Report, Ms Mutale called on women to reassert their position in the gender dynamics and to lead without seeking permission.

“The next generation of women will need to break down the barriers that have held women back for centuries,” said Ms Mutale

“We do not want women to just make up the numbers, we want a generation of women that has real power to make and influence real decisions in the boardroom, in parliament and also in the home,” she said.

The Minister reiterated that access to quality education empowers women and promotes better health and livelihood options.  He stated that despite progress over the last decade, the right to education is still denied to an unacceptably large number of girls today.

“The key to any societal change is ensuring there’s at least a basic understanding by every single citizen to the idea that the right to education is something that is absolutely core”, he said. 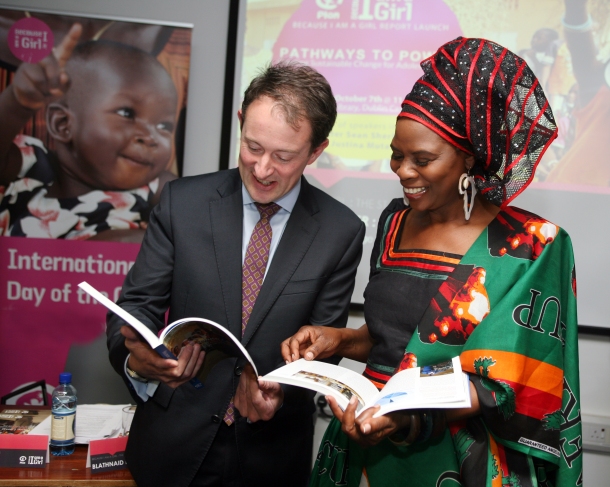 The Chief Executive of Plan International Ireland, David Dalton highlighted the need to change norms such as infanticide, child marriage, religion and violence against women.

Mr Dalton stated that girls face double discrimination because of their age and gender.

“Astonishingly, 70% of one billion people living in extreme poverty are women and girls”, said Mr Dalton

Mr Dalton called for a standalone goal on gender equality in the post-2015 Sustainable Development Goals and the establishment of a United Nations Commission on information and accountability for gender equality.