Ms Mutale is the Ambassador of the South African Fashion & Culture Week, which will be presented by Julian Bennett, Fashion Guru and ex Presenter on Channel 4.  The Show has attracted the presence of various TV personalities and models from the London celebrity scene who will grace the event with their presence including: Bianca Gascoigne, Model and Television Personality; Abigail Clark, Actress from ITV Reality Show “The Only Way is Essex (TOWIE”); Maria Kouka, Channel 5 TV Presenter, Actress and Model; Beauty Queen Farah Sattaur, former Miss Guyana and Actress from MTV’s “Ex on the Beach’;  Sarah Mclean, from Big Brother;  Spencer from “Made in Chelsea’; Two Shoes from X Factor; Hugo Taylor from “I am a Celebrity Get Me Out of Here”; and Andella Chileshe Matthews, reigning Miss Zambia UK, who is also Miss Zambia Universe and 2014 Princess of the World Zambia, among many others.

Produced by Pilyvan Consulting, SAFACW is working closely with the South African High Commission, with support from the UK Trade & Industry and the Office of the London Mayor.

2014 SAFACW co-producer, Pily Mirazi has her own celebrity status. She has appeared on Reality TV show “The Odd Couple” on Fitness Channel on SKY 282.  Pily was also featured in another Reality TV show, “Your Style in His Hands” and is a regular on Big Brother’s “Bit on the Side” Audience.  Pily is also featured in a documentary by comedian Frank Boyle and has appeared as an extra in “The Only Way is Essex”.

The 2014 SAFACW will feature eight young designers from South African who have been selected for their outstanding achievement in the fashion industry in South Africa to give them exposure to global markets.  The selected designers include Sandile Mlambo, owner of fashion label “ALFALFA”; Kujula Mntambo of fashion label “Gravitie”; Shaun Mojola/Dugen designer of “Nguni Shades”; Thulani Mnguni designer of  “Tribal Skin”; Sandile Mngandi of Duke “Clothe your Soul”; Sane Cele of “Tempracha”; Melinda Gopaul, of “Noice”; and Sibu Msimango of “Maparkisha”.

Selected UK designers will also showcase their designs at the 2014 SAFACW including Gerda Truubon and polish-born fashion designer Erwin Michalec, who will showcase his famous handpainted designs; while Jennifer Klein will exhibit her ready-to-wear collection from “My A-Dress Book”.

The long term objective 2014 SAFACW is to establish a Fashion & Culture Week to showcase South African fashion and accessories.  The SAFACW Show will also provide a platform to promote South Africa’s trade and tourism, and to act as a cultural exchange programme between the UK and South Africa. 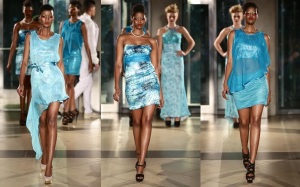 The main ethos of SAFACW is youth development and the event is aimed at creating a highly successful and entertaining show of one day, with workshops for young designers to train them to build a successful fashion business and brand reputation.