Ambassador extraordinaire and world recognized African Woman of the Year, Her Excellency Madame Justina Mutale has joined former Secretary-General of the Commonwealth, Emeka Anyaoku and former President of the Republic of South Africa, Thabo Mbeki in a new Campaign sponsored by Oxfam to encourage women’s participation in politics and governance in Nigeria and other parts of Africa as well as the rest of the world.

Ms Mutale, who is named as one of 365 Africa’s most respected names, well-known faces, and influential voices has joined other prominent African personalities and African Royalty who are lending their names and voices the “STRONG VOICES” Campaign, an initiative by Guardian of the Nation International (GOTNI), a Nigerian based Youth Leadership Capital Development organization.

“In the wake of the forthcoming Post-2015 Sustainable Development Goals, women’s increased political participation will be fundamental for Africa to achieve the desired sustainable development”, says Ms Mutale.

“I support women in Politics, because women being in politics is a strategic position to achieve all other rights as well”  Says Winnie Byanyima,  Oxfam International Executive Director & CEO.

Ms Mutale, who is also the Gender Equality Ambassador & Spokesperson for the International Women’s Think Tank is a strong advocate of gender equality and women’s empowerment.  Last year, she took the baton from Cherie Blair, wife of former British Prime Minister, Tony Blair to launch Plan Ireland’s “BECAUSE I AM A GIRL” Report, which looks at the state of girls around the world. The Report commemorated the 2014 United Nations International Day of the Girl in Ireland. Cherie Blair launched the same report the previous year.

Ms Mutale attended the recently concluded 59th Session of the United Nations Session on the Status of Women in New York.  She joined Hollywood Actress Meryl Streep, together with Freida Pinto, Marcia Cross, Chris Martin and other Stars at the US Premiere of “INDIA’S DAUGHTER” a film documentary commissioned by Vital Voices and Plan International to highlight the violations of the human rights of women and girls around the world, as part of the “BECAUSE IAM A GIRL” Campaign. 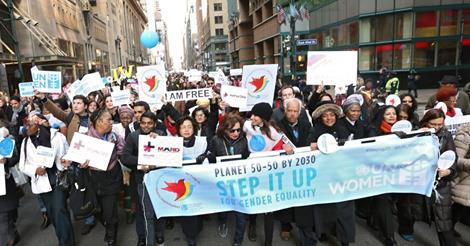 She also joined the United Nations Secretary-General in the International Women’s Day March which took place in New York with the participation of the First Lady of New York, Chirlane McCray; UN Women Executive Director, Phumzile Mlambo-Ngcuka; Liberian Nobel Peace Laurent, Leymah Roberta Gbowee; Actors Paul Bettany and Ana Lynne McCord, together with other women’s rights activists from all over the world.